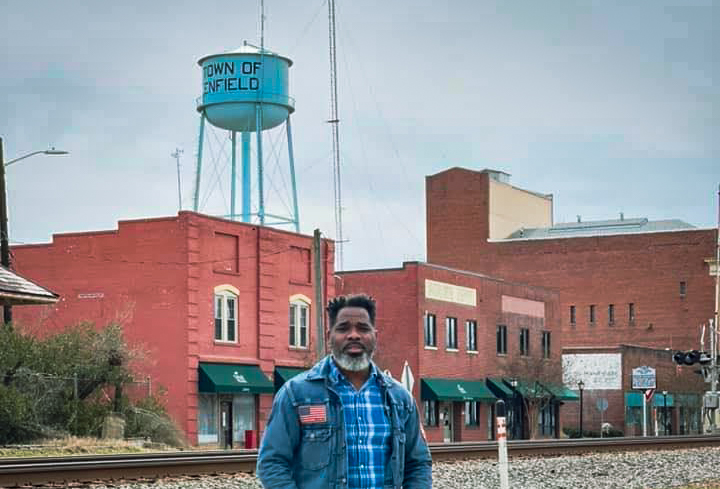 “Rural spaces are as progressive as urban spaces. It just requires the right message and messenger.”

Voters in Enfield, North Carolina chose a new direction in the May 2022 election. They elected Mondale Robinson, a progressive champion and founder of the Black Male Voter Project. The election results show how rural leadership rooted in community relationships leads to progressive victories.

Many people in rural communities are eager for a change in their local government, including the residents of Enfield. Once known for its tobacco and soybean industries, the city is the poorest in North Carolina. People are moving away, and the population has dwindled to less than 2,200 residents. With limited access to affordable and healthy food, residents must drive long distances to grocery stores with fresh produce. It’s also notable that ninety percent of residents are Black, and some of the city government elected officials and appointees aren’t representative of residents.

Many Enfield residents have a deep connection to the community and region. They have built relationships over decades and generations.

Mondale, who grew up in Enfield, is well aware of the challenges residents face and the strength of its community ties. During his campaign, he prioritized listening to residents. Mondale and over a dozen volunteers canvassed door-to-door over and over again. Through these conversations, the team created a platform that emphasized collaboration and boldly championed solutions for shared prosperity.

He also frequently explained how to vote and the mechanics of registering to vote, early voting, and election day voting. The campaign engaged people who rarely vote and who have never voted. They talked with voters multiple times, building relationships and excitement over the campaign. Mondale also used social media to live broadcast informal messages directly to voters.

The strategy worked. Turnout increased, and residents voted overwhelmingly for Mondale. He beat the incumbent mayor with 76% of the vote. Congratulations to Mondale and the city of Enfield!

HOW TO WIN RURAL ELECTIONS

Rural Democracy Initiative (RDI) has written about what works in Rural America, and Mondale’s campaign exemplifies many of the successful tactics. At RDI, we don’t recommend softening our message for an elusive “moderate,” but that doesn’t mean cramming progressive buzzwords into a platform. As Mondale showed, successful candidates listen and pay attention to what people are asking. They build relationships, and they call for solutions that address people’s most pressing needs.

Our analysis is informed by the successful work of the Black Male Voter Project. The group increases the number of Black men that are consistent voters — focusing on 17 priority states. People are more likely to vote if they have a reason to believe that voting will impact their lives. Mondale shows the transformative power of direct voter engagement and building programs around issues important to Black men.

“Anybody can take the Black Male Voter Project approach and win an election,” says Mondale. “It takes the discipline to do the work and not let your ego get in the way.”

After years of impacting elections by mobilizing communities across the country, Mondale took his model home to Enfield. Last month, more people in Enfield voted for Mondale than any other candidate, including county, state, and federal races. These results follow a trend: people get excited about local candidates, which bubbles up the ballot as support for must-win state and federal races and issues.

While Mondale says that anybody can win an election, it doesn’t mean it’s easy. As someone who has worked on campaigns and run for elected office, I know it takes significant emotional energy and a considerable time commitment. Getting the turnout that Mondale experienced takes a widespread community effort. That’s why RDI actively funds and supports locally-rooted civic engagement efforts. We don’t fund individual political campaigns, but we proudly support year-round relationship building, candidate development, and organizational capacity. We also recommend that state and federal campaigns build relationships with and actively support local leaders and groups.

RDI shares Mondale’s vision and the potential he sees in cities like Enfield — in North Carolina and across the country. We are excited to support a Winning Rural Network that includes the Black Male Voter Project and similar organizations working to rebuild the civic infrastructure and elevate inspiring leaders in rural communities.

We invite everyone in our network to congratulate Mondale. Let’s take a moment to appreciate our rural leaders and how the relationships we form improve rural communities — and therefore the entire country.